Male Pattern Hair Loss is a genetic condition that results in a person’s hair in the frontal hair line, midscalp or crown regions of the scalp become thinner and eventually never regrow resulting in permanent hair loss. The hair on the sides and back are not commonly impacted by this form of hair loss for men. The treatment options available for men’s hair loss include Hair Transplantation, Platelet Rich Plasma, Finasteride and Minoxidil amongst other various medications.

For some men, a balding scalp is embarrassing and shakes his self-confidence. In other cases, hair loss can happen in unattractive patterns and prematurely age a man. Whatever the reason, if a man wants to change his appearance with hair restoration, the methods available today are safe, effective and advanced.

Causes of Androgenetic Alopecia in Men

Male-pattern baldness, or androgenetic alopecia, is the most common type of hair loss in men. It is caused by the regulation of the hormone dihydrotestosterone (DHT). Male-pattern baldness progresses with age, and its patterns and progression are influenced by genetics.

Our hair has three stages: anagen (growth) phase, catagen (degredation) phase and telogen (resting) phase. The growth phase lasts two to eight years, and then the hair goes into a short transitional phase (catagen), which lasts two to three weeks, where the blood supply to the hair is cut off and growth stops. The telogen phase lasts about two months, while the hair rests. When the anagen phase re-starts, it pushes the dead hair out. Humans typically lose 50 to 100 hairs from their heads a day.

When a man experiences hair loss, it happens during the anagen phase. DHT slows hair growth, which reduces the follicle size and makes the hair finer and, eventually, stop growing.

DHT causes male hair loss by reducing the growth phase and causing the hair follicles to shrink, which makes hairs very thin and, eventually, stop appearing. The photo on the left shows hair follicles that have not been affected by androgenetic alopecia. The hairs are thicker, and the follicles are more densely populated. The photo on the right shows thinning hair caused by androgenetic alopecia. The hairs are thinner, and the follicles appear to be farther apart.

DHT is the abbreviation for the hormone Di Hydro Testosterone. This hormone is also known as the hair loss hormone that causes hair loss for men. DHT is formed in the body where the testosterone hormone bonds with a freely available enzyme to turn the testosterone into DHT. DHT is present in everyone, however only when a person inherits the balding gene do they experience Male Pattern Balding or Hair Loss for Men.

Only the hair in the frontal hair line, midscalp and crown regions are impacted by DHT, the hair on the sides and back of the head are known to be genetically resistant to the impacts of DHT and the balding gene, the reasons for this is unknown.

How does DHT cause hair loss?

DHT on its own can not cause hair loss. Only when a person has inherited the balding gene AND combined with the presence of DHT in their system.

Three areas of the scalp are sensitive to DHT: facial hairline, top of head and crown. 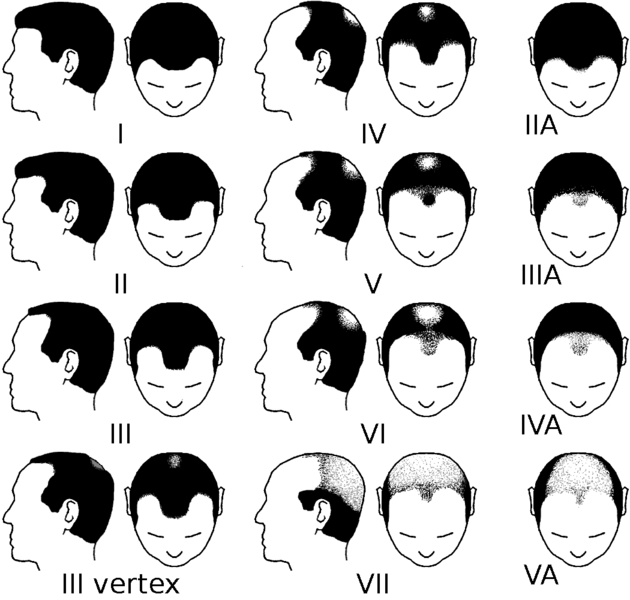 Types of Hair Loss in Men

Male-pattern baldness is referred to as either diffuse patterned or unpatterned alopecia, and the distinction between the two is important because it helps determine whether the man-or woman-would be a candidate for hair transplant surgery.

Diffuse-pattern alopecia is the most common pattern of hair loss in men and shows up as diffuse thinning in the top, crown and front with a stable “wreath” zone above the ears and around the back of the head. Men who have diffuse-pattern androgenetic alopecia are good candidates for hair transplant surgery because they have a stable area of permanent hair that will hide surgical scars.

Diffuse unpattern alopecia is less common in men and occurs when a man has diffuse hair loss all over his head, with no stable area. Men with this condition are not candidates for surgical hair transplant because the stability of the donor hair is uncertain, and as the hair continues to thin, the scars from the donor site will become visible.

If you are a man who has experienced an abnormal amount of hair in the shower or on your pillow, or you’ve changed your hairstyle to hid thinning hair, you are one of 35 million men in the United States who are affected by some degree of male pattern baldness, according to the International Society of Hair Restoration Surgery. Androgenetic alopecia, or male pattern baldness, is the most common cause. It is hereditary-from mom and/or dad-and is caused by dihydrotestosterone (DHT), a substance found in men that shrinks hair follicles until the no longer produce hair.

Hair restoration for men who have experienced thinning of the hair and want to change their appearances to restore a more youthful look have options.