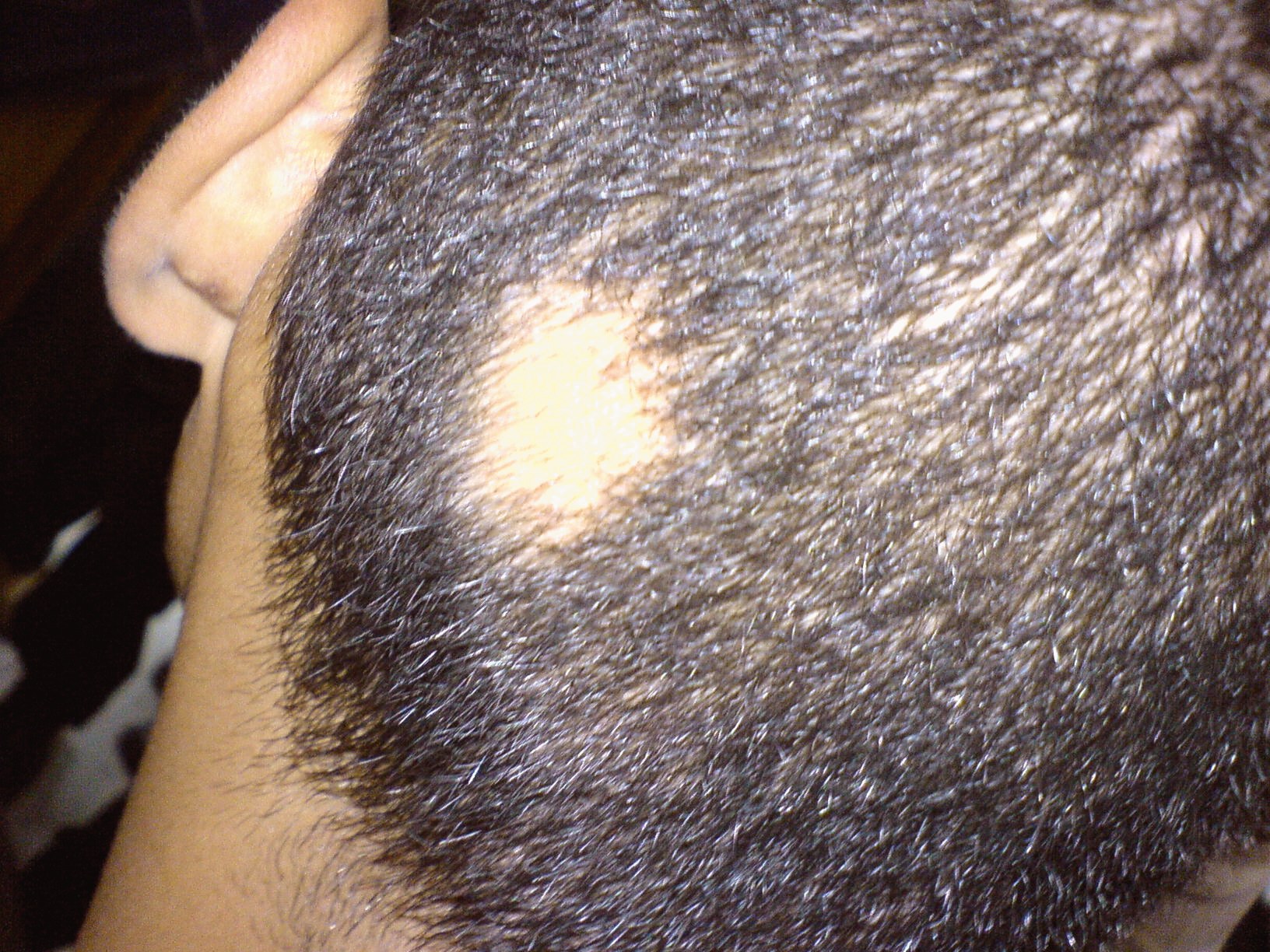 Alopecia areata is an illness that causes hair loss. The most apparent areas of such hair loss in humans is the head, yet other areas of the body, such as the pubic area or the face, may also be affected. Alopecia areata is sometimes referred to as “patchy baldness” simply because the affected area does not use its hair in an even fashion but instead the hair loss occurs in patches. Alopecia areata causes are still being discussed, yet the general consensus on what is alopecia areata usually points toward an autoimmune disease, similar to lupus. As a matter of fact, onset of alopecia areata in humans is sometimes seen in conjunction with the development of other autoimmune disorders as well, and physicians will order blood work and a battery of other tests to catch any emerging ailment as soon as it evidences itself.

There are different degrees of alopecia areata. Sometimes it is not only hair loss, but also the nails are affected.

There are three degrees of alopecia areata:

In some people with alopecia areata, the nails are also affected. For example, pits and grooves arise, or the nails become friable.

Alopecia areata does not in itself affect other physical functions of the body. One can get as old with it as people without this condition.

Alopecia areata probably belongs to the so-called autoimmune diseases. This means that substances are formed in the body that attack the body. With alopecia areata, the hair root bags are attacked so that the (colored) hairs that grow out fall out.

People with alopecia areata are more likely to suffer from other diseases associated with immune system disorders. Examples are some thyroid disorders, vitiligo (white spots on the skin) and allergies such as eczema and asthma. Stress factors probably play a less important role. Whether heredity plays a role is not known, but it is often seen with identical twins that they both suffer from alopecia areata. Alopecia areata also occur in the family in approximately 10 percent of patients.

Opinions differ on the treatment for alopecia areata. The effect of no therapy has been conclusively proven according to scientific standards. Doctors therefore often choose to wait for the natural course. For many people, the condition will naturally go away. In 70 to 80 percent of cases, hair growth recovers spontaneously within a few months to a year. Scientists are still looking for what causes alopecia areata. Read more about alopecia areata research here.

Although alopecia passes away on its own in many people, dermatologists sometimes opt for treatment. That mainly depends on the phase the alopecia is in. Dermatologists usually have a list of the most effective treatment methods in their eyes. They go through this list until they either find a treatment that appears to work or have run out of their options.

Because in 70 to 80 percent of the cases hair growth recovers spontaneously within a few months to a year, it is often unclear if the result is positive as a result of treatment or a spontaneous recovery.

In the case of alopecia areata, totalis and universalis, Hair transplantation is not suitable for both women and men. The possibly (suitable) transplanted hair can fall out again and the characteristic areata spots can appear elsewhere on the head.

Prednisolone is used in a wide range of conditions, in which inflammatory symptoms play a role, such as asthma, rheumatism, multiple sclerosis, in intestinal diseases such as ulcerative colitis and Crohn’s disease, and in allergic reactions. In combination with other medicines, it is also often used to prevent rejection reactions after organ transplants.

If there is more serious hair loss, then dermatologists sometimes choose a treatment in which the patient is deliberately made allergic to a substance, often diphencyprone (DPC). This substance is regularly applied to the scalp. The intention is that the eczema reaction of the scalp slows down the inflammatory process that causes hair loss. The immune cells that surround alopecia areata around the hair roots move to the surface of the skin where the diphencyprone is applied.

This treatment is sometimes effective. It causes a lot of itching and irritation. If the treatment is effective then the good result will only continue to exist as long as you continue. Few dermatologists in the Netherlands and Flanders apply this treatment.

In combination with certain medications (psoralenes) the affected skin is irradiated with ultraviolet light (UVA). This treatment is called the PUVA therapy. The UV light has a defense-inhibiting effect. For some patients, that gives good results in the beginning.

The more hair returns, the less light can come on the skin and the hair usually falls out again. Even when treatment is stopped, the returned hair almost always falls out again. The related photochemotherapy is also sometimes applied. With long-term use, the risk of skin cancer is clearly increased.

Cyclosporine is a medicine that comes from transplantation medicine. It suppresses the rejection responses of transplanted organs. In the meantime, it is also being used successfully in disorders where the immune system is disturbed, such as psoriasis and constitutional eczema.

Cyclosporine is marketed under the Sandimmune and Neoral brand names. The drug has rather serious side effects, such as kidney damage and high blood pressure. That is why the patients who use it are constantly monitored closely. The risk increases especially with longer use. The remedy does not cure, but suppresses the body’s natural defenses. For life threatening situations, such as maintaining transplanted organs, it is indispensable.

Due to the serious side effects that often occur with long-term use, this medicine is not obvious in the case of a nasty but not life-threatening condition such as alopecia areata.

Stimulation therapy consists of applying ointments, creams or lotions that cause irritation to the scalp. An example of this is Pekelharing lotion. Whether stimulus therapy is effective may be doubted. A substance used for therapy is capsaicin, an irritant that is also found in chillies. The substance is not considered harmful.

Another irritant, dithranol (also known under the Anthralin and Gignoline brand names), is thought to improve this alopecia areata. Real hard evidence for this has not yet been provided. There are doctors who describe good experiences with dithranol, but there are also disappointing conclusions. The aforementioned local immunotherapy with diphencyprone is in fact also a stimulus therapy.

Dithranol probably derives its effect by influencing the way in which the cells of the immune system respond to each other. Most experience with it has been gained in patients with psoriasis. This skin disease often responds particularly favorably to dithranol.

Biologicals are not used in practice for alopecia areata because these agents are very expensive and not proven effective. With psoriasis, biologicals are only reimbursed if all other drugs have been tried in vain.

Gene therapy is the introduction of genetic material into (human) cells. This method of treatment is still under development and aims to cure hereditary disorders by replacing a malfunctioning gene with a ‘healthy’ gene. According to dermatologists, gene therapy is not yet a realistic option in the treatment of alopecia areata. Possibly this will change in the further future and even the very high costs will fall.

Minoxidil has been developed as a blood pressure lowering agent, but also appears to have a stabilizing and stimulating effect on the cells of the hair follicle. In addition, it stimulates the cells to divide and extends the growth phase of the hair. Minoxidil works best in a concentration of 5 percent, a strengthened concentration that can be ordered at the pharmacy. Treatment with minoxidil is almost exclusively prescribed for adults. A modest effect has been more or less scientifically proven, but overall hair regrowth is not very likely.

A disadvantage is that when the use of minoxidil is stopped, the hair can fall out again. There are also side effects such as facial hair growth, heart rhythm disorders and headache. Minoxidil is not reimbursed by health insurance.

Psychodermatology is the study of psychosocial factors in the development, course and treatment of skin diseases. Far-reaching events in personal life and stress are often seen as reasons for the outbreak of alopecia areata. And vice-versa; The psychological state of a person is an important factor in the return of hair growth.

It is often claimed that stress influences the course of their alopecia areata. It is not conclusively proven that there is a connection between the stress experienced and the amount of hair loss.
If psychological factors play a role in autoimmune disorders, could we treat these disorders through psychological treatments?

Some experts believe that it is not the stress itself that alopecia areata causes, but the way in which the person responds to stress.

Research showed an increased concentration of stress hormones, even in the hair follicles. This could be an indication that there is a relationship between the personality, the autoimmune system and the development of alopecia areata.

With this observation we come to the field of psychoneuro immunology; the science of the connection between mind and nervous system, which studies the influence of the nervous system and emotions on the immune system.

The medical fields of psychodermatology and psychoneuroimmunology, both developed fairly recently, appear to be relevant for the further development of the treatment of alopecia areata.

Sometimes out of conviction, but also because traditional medicine does not (yet) offer a solution, many try alopecia areata supplementary and alternative therapies. They look for their personal or extra way to get their hair back. Various additional or alternative treatment methods are available for hair loss, including homeopathy, herbal therapy, hypnotherapy and nutritional supplements.

There is insufficient evidence that these alternative methods add anything medically, but that does not mean that they would not be psychologically valuable. Certain forms can help relax and “make the person feel better”. A placebo effect is also not unthinkable here.

The medical world is often ambiguous about alternative treatments. Many doctors reject them; but there are also those who embrace it.

Although there is no evidence for or against the effect, this is not yet a reason to reject it. Proven success is also out of the question with most regular, recognized treatments. For some people, combining traditional and complementary treatments can work out well.

Many patients with alopecia areata have tried one or more alternative treatments ranging from acupuncture or dietary instructions to the laying on of hands. There are positive and negative experiences. Nurturing hope and belief in a treatment method often turns out to be a (likewise unproven) success factor.

Read about a woman who treated her alopecia areata with CBD oil here!